How to define flat foot prints

Determine flatfoot at home, both at home and with medical diagnostics. As a rule, in the first case, flat feet can be identified by its symptoms, and in the second - after medical procedures.

How to determine the flatfoot of the house

You can conduct a small test for the definition of flatfoot. Take some fat cream and spread your feet. Stand flat on a sheet of paper and then examine the imprint. On the inside of the foot there should be a notch( dry section of the sheet) with a width slightly more than half the width of the foot. If it is not available or it is narrower, this is likely to indicate the presence of flat feet. To learn how to cure platypodia, you can from our article.

Flat feet can develop in people working on mobile work or in a service that requires a long-term stay in a static standing posture. Here are the main signs of flatfoot:

These signs may indicate not only flat feet, but also the presence of other, more serious diseases( for example, vascular or endocrine).Therefore, for a more precise definition of flat feet, it is better to turn to medical methods.

X-ray images of both feet are made in a direct and lateral projection when a person is standing. The orthopedist carefully studies the values ​​of the angles of deformation of the foot, after which he makes an accurate diagnosis with the degree of flat feet.

This is the scientific name of the method that was described at the very beginning of the article. The only difference is the use of Lugol's solution to obtain a clearer print.

How to define a flatfoot in a child?

Flattening is the deformation of the foot resulting from the flattening of its arch. For a child's age, the deformation of the longitudinal arch is characteristic, in connection with which, the sole of the child touches the floor with its entire surface. Diagnosis of this condition is carried out at the age of five or six, since it is very difficult to determine the flat feet in a young child due to the excessive softness of the bone apparatus of the foot.

Symptoms, stages and types of flatfoot

Longitudinal flat feet is a pathological condition in which the entire foot touches the floor with its entire surface, which increases its length and shortens the distance between the floor surface and the inner edge of the foot. In this case, the clubfoot development is noted, because of which the shoes wear out along the entire length of the heel and the sole from the inside. In clinical practice, three degrees of flatfoot are distinguished:

With the development of transverse flatfoot, the length of the foot is noted as a result of the divergence of its bones and the deviation of the thumb from the outside( the middle finger is deformed to form a hammer-like shape), and a lump forms at the base of the thumb. Depending on the degree of curvature of the big toe, there are three degrees of flatfoot:

Note: a consequence of this condition can be bursitis( inflammation of the periarticular bag) and a strong deformation of 2-4 toes of the foot.

With mixed flat feet, there is simultaneous presence of longitudinal and transverse flat feet, which are accompanied by more severe symptoms.

Symptoms of flatfoot in children

It is possible to suspect the development of the disease in a child on the basis of complaints. Symptoms of flat feet in children include:

Diagnosis and prevention of pathology

Many parents are interested in the question of how to determine the flat feet of a child at home. To do this, there is a very simple test. The legs of the child should be greased with something greasy and put it on a pre-prepared sheet of paper( so that the body weight is distributed evenly).In the absence of a pathology, the footprint of the child will look like this:

However, if the test was similar to this print, you should consult a doctor who will help to diagnose correctly:

Note: if the child does not have flat feet, the big toe forms onestraight line with heel.

In order to prevent flat feet in children 1 year from the very first days with the child should be engaged in gymnastics, as well as take care of quality shoes for the baby. Specialists recommend choosing children leather shoes with a flexible enough sole, a wide toe and a hard elastic back. Shoes for a child should be slightly larger than his foot size( this will prevent the development of foot deformation).In order to prevent flat feet in a child 2 years old, you should walk your baby barefoot on the grass or along the sand, as well as perform special preventive exercises, built in the form of a game.

Note: Do not forget about preventive examinations at the pediatric orthopedic.

The stop is a unique anatomical design, shock absorbing, softening the impacts when walking, and also protecting the spine and internal organs. However, in the case when this ligament mechanism is damaged, the basic cushioning function will have to be performed by the spine( or rather, the intervertebral discs).Due to constant overloads intervertebral discs will begin to lose elasticity and wear out. As a consequence, the vertebrae will move and most likely, osteochondrosis will develop. In connection with the fact that the symmetrical flattening of the feet does not always occur, because of flat feet, one foot of the child may become shorter than the other.

Warning! If appropriate measures are not taken, such severe consequences of flat feet, such as displacement of the pelvic bones and development of lateral deformations of the spine, can arise.

Patients suffering from flat feet, due to the displacement of the spine, often complain of severe headaches, and the consequence of this pathology may be diseases of internal organs located along the perimeter of the musculoskeletal system. Due to the fact that the pelvic and knee joints are not able to absorb shock, flat feet can lead to the development of various forms of arthrosis, due to which in the joints there will be serious changes that cause pain even with minor movements and a slight load on the legs. That's why experts insist that flat feet should be treated, and the sooner treatment is started, the higher the percentage of probability to get rid of this unpleasant disease, and, with the least expenditure of resources and resources.

how to determine the degree of flatfoot at home

There are several methods of testing on the flatfoot
On the print
This technique has already been told by Vika Lubnina. I will not talk.
Although I will make a reservation that this method is inaccurate in that the trace will depend on how to smear, how to become and so on.
A ruler for the distance from the floor to the top surface of the scaphoid
Radiographically
A good and quick picture can be seen on the Plantoscope( a kind of stool made of thick glass, viewed from the bottom to the bottom)
An objective measurement is taken either from the x-ruler. Measure the distances between the tuberosity of the scaphoid bone and the support surface. In adult men, this distance should be at least 4 cm, in adult women - at least 3.5 cm. If the corresponding figures are below the indicated boundaries, a decrease in the longitudinal arch is noted.
For the determination of the degree of flatfoot, the formula "Sub-metric index" is used, in which( height of the foot) is divided into( length of the foot).more than 31 high arch 29-31 norm, 27-29 flat-footed 1st st., 25-27 flat feet of the 2 nd st., less than 25 platypodia 3rd instar
Degrees of longitudinal flatfoot measured Radiographically
I degree: angle of the arch 131- 140 degrees, height of the arch 35-25mm. There are no deformities of the foot bones.
II degree: the corner of the vault is 141-155 degrees, the height of the vault is 24-17 mm. The talus bone is shortened, its neck is not underlined. There may be phenomena of deforming arthrosis in the talon-navicular articulation or calcification of the ligamentous apparatus on the back surface of the foot.
III degree: the angle of the roof is 156 degrees and above, the height of the arch is less than 17 mm. A small protrusion on the plantar surface of the calcaneus becomes massive. There is also a flattening and a transverse arch, subtracting the contracture of one finger, the foot is penetrated, the heel is deflected to the outside. See Annex 3.
Degrees of transverse flatfoot:
( this is when the curvature of the thumb and grows "bones")
I degree: angle between 1 and 2 metatarsal bones 10-12 degrees, angle of deviation 1 finger 15-20 degrees.
II degree: angle between 1 and 2 metatarsal bones 13-15 degrees angle of deflection 1 finger 21-30 degrees.
III degree: angle between 1 and 2 metatarsal bones 16-20 degrees, angle of deviation 1 finger 31-40 degrees.
IV degree: the angle between 1 and 2 metatarsal bones is more than 20 degrees, the angle of deviation of 1 finger is more than 40 degrees.
If you are interested in CLEARING the flatfoot and the "bones" near the thumb of the foot, see My My ONE SITE hallus-valgus on the People
Flattening can and should be treated!
Massage and stubborn exercises!
With flat feet, poor cushioning, constant micro-concussions of the spinal cord and brain, headaches. 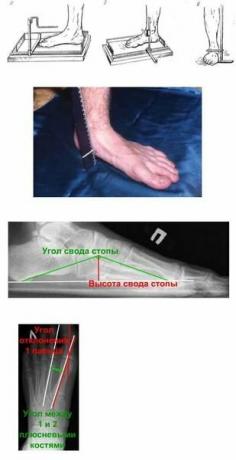 stand up with wet( wet) feet on the floor.look at the footprint.compare with the track of a healthy person( parents, friends, someone who does not have 100% flat foot), the more your trail is "flattened" compared to the "normal" track, the more flat your

is. How to determine the flat foot?

put a foot = foot on a piece of paper and draw a foot with a pencil - if the figure has a foot that is covered by more than half, there is a flatfoot

soak the feet and step on the floor. . you will immediately see if there is an arc or not. .. the absence of an arch-flat foot..

you paint your foot in watercolor( gelatinno black color) and you get on A4 paper. If everything is printed on paper, it means flat feet!

go to the doctor.even better in the military machine

Look at the footprint! IF FOOT PRINTED AS "LAST" ALL STOP-means there is a problem.

Soak or wet the oil and put on paper. Follow the trail. Or wet foam, put a sheet of paper on top and gently stand up. The same trace will appear. You will see, if that is not so)))

You have to spread your feet with a greenish leg and stand on a blank white sheet of paper. If the pads of the fingers and the heel are well printed, in the middle from the outside, a thin print is the norm.if between the half-heels and the heel a wide print is a flat foot.

It is possible to determine( an orthopedic doctor), and it is almost impossible to cure!

Psychosomatic diseases of the back Psychosomatic causes of back disease. What thoughts affect our skeleton, bones and joints, spine, spinal and bone marrow, back muscles, injuries, fractures,...

Flat feet in adults: a photo of flatfoot and exercises in the prevention of flatfoot Flat feet of some are perceived as a "frivolous" disease, which is not worth paying close attention to. Howe...

What Parents Should Know About Disease In general, callosity is the pathology of the foot joints, in which the baby's leg is simply not able to stand in a level position. The foot thus "leaves"...