Arthrosis of the scaphoid joint

Deforming arthrosis of 1 metatarsophalangeal and other joints

All joint diseases, despite the similarity of external manifestations and symptoms, with their detailed study have different causes of origin and differ in x-ray, ultrasound and other diagnostic features. The most common are osteoarthritis and rheumatoid arthritis.

While rheumatoid arthritis refers to diseases of an autoimmune nature of an unclear genesis with a symmetrical lesion of the joints of the skeleton, osteoarthritis means degenerative and dystrophic cartilage damage of articular surfaces with subsequent spread to the entire joint and surrounding tissues. Osteoarthritis most often affects joints of feet, hands, knees, hips, neck. Osteoarthritis, arthrosis, deforming osteoarthritis - all these are names that are synonymous with osteoarthrosis and unite a fairly large group of pathological processes in the joints.

Deforming arthrosis leads to destruction of cartilaginous tissue, its thinning, loss of strength and elasticity, the appearance of cracks, because of which the joint bones are destroyed by osteosclerosis with the appearance of multiple cysts and osteophytes.

Among the main causes of osteoarthritis can be identified trauma, congenital dysplasia and inflammation of joints of various types( including rheumatoid arthritis).And trauma is the most common cause of osteoarthritis, especially when the joint is systematically hard physical load( especially professional activity).It should be noted that inflammation in the joints with deforming arthrosis is always secondary and is never the root cause of the disease.

Osteoarthritis, as well as rheumatoid arthritis, is manifested by the following symptoms:

With deforming arthrosis, blockade syndrome can occur when a bone or cartilage fragment is trapped between the articular heads or embedded in soft tissue. As a result, there are sharp intense pain sensations that make any, even insignificant, movement unbearable. 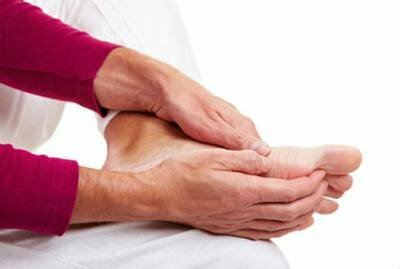 Common causes of osteoarthritis of the first metatarsophalangeal joint are:

It is possible to diagnose deforming arthrosis with the help of radiography. Characteristic radiographic signs for this disease are a decrease in the lumen of the joint gap, corresponding to the stage of degeneration of the cartilaginous tissue and the presence of bone growth along the edges of the joint surfaces.

Osteoarthritis of 1 metatarsophalangeal joint is divided into 3 stages depending on the nature of the manifestations:

Deforming osteoarthrosis of the talon-navicular joint

Arthrosis of the talonic scaphoid joint is most prevalent at the age after 20 years. This is due to the fact that the period of active growth of the body coincides with the period of a vigorous and mobile life of a person when frequent ankle injury occurs in the form of fractures, bruises, dislocations and sprains. At the first suspicions of arthrosis of the talonous navicular joint, it is necessary to seek medical help as soon as possible, as timely detection of the disease and properly selected treatment will allow not only to get rid of the disease, but also to avoid serious consequences in the form of scoliosis of the spine and osteoarthrosis of the hip and knee joints.

An important role in the occurrence of arthrosis of the talon-navicular joint is played by its congenital dysplasia, when due to abnormalities in the structure of the foot and muscular ligaments, the process of wear of the cartilage and bones proceeds much faster. In addition, the presence of various inflammations, such as rheumatoid arthritis, is also a provoking factor in the occurrence of this joint pathology. Deforming arthrosis of the talon-navicular joint can also be caused by obesity and various disorders in the metabolic processes of the body. 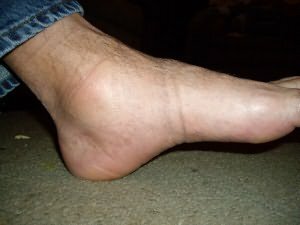 Typical symptoms of arthrosis of the talon scaphoid joint are, first of all, the appearance of swelling of the ankle and foot. In this case, any movement of the foot causes acute pain in the ankle, which increases as the disease progresses. There are inflammatory processes of the periarticular muscle tissues. As for arthrosis of any other joint, and for arthrosis of the talon-navicular joint, X-ray signs are typical in the form of narrowing of the joint gap and the formation of osteophytes along the edges of the joint surface.

Deforming osteoarthrosis of the wrist joint

Arthrosis of the wrist joint usually develops after the traumas and is rare. Injury of the wrist joint occurs due to the protective properties of the body, when the instinctively it falls on the hands. Secondary osteoarthritis of the left or right wrist joint arises against the background of the inflammatory process occurring in the joint.

The most common wrist disease is rheumatoid arthritis. Therefore, if you have pain in your wrist, you need to establish the right diagnosis as soon as possible. You can distinguish these diseases on your own, at a later stage of development. Arthrosis of the wrist joint is extremely rarely accompanied by edema, it is rather a symptom of rheumatoid arthritis combined with muscular atrophy. Painful sensations in the case of osteoarthritis of the wrist joint occur with physical exertion, while rheumatic pains manifest mainly at night. In addition, rheumatoid arthritis is characterized by a symmetrical lesion of several joints simultaneously, which can not be said about arthrosis, it develops in a particular joint. 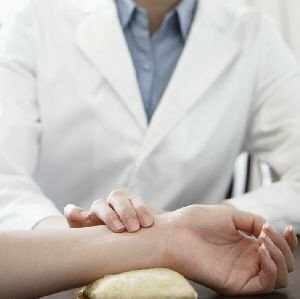 If the pain sensations are severe enough, it is necessary to limit the wrist mobility, applying various methods( elastic bandage, gypsum, orthosis).Depending on the severity of the disease, non-steroidal anti-inflammatory drugs are used to alleviate the symptoms, along with exercise therapy and physiotherapy. In especially severe cases, when the aforementioned methods of treating arthrosis of the wrist joint have been ineffective, surgical intervention is required, during which an arthrodesis( complete immobility of the joint) is created or endoprosthetics are performed( replacing the destroyed fragment with an artificial implant).The decision on whether it is mandatory to carry out endoprosthetics of the wrist joint is made exclusively by the individual, by the doctor and the patient, taking into account the clinical picture of the development of the disease and the need for normal physical functionality of the left or right wrist. Complete recovery of the brush after endoprosthetics takes 3 to 6 months.

Osteoarthritis of unco-vertebral articulations occurs in the region of 1-2 cervical vertebrae. The basic factors in the onset of this disease are:

Characteristic signs of arthrosis of unco-vertebral articulations are neurological diseases of the neck and shoulders( neuritis), manifested in the restriction of movements of the head, shoulders and hands and accompanied by severe pain and a decrease in neurologic reflexes. There is a violation of cerebral blood supply, the appearance of dizziness and high blood pressure.

In arthrosis of unco-vertebral articulations, thinning and degeneration of intervertebral discs and the formation of bone growths occur.

In the early stages of development, unco-vertebral arthrosis is almost not manifested. Severe short-term pain can occur with sudden movements of the head and lifting of weights. As the disease progresses, pain occurs even with light loads, especially when it raises in rainy or windy weather, limiting the movement of the head. There is a violation of sleep, neck movements are accompanied by a crunch. In the late stages of development of unco-vertebral arthrosis, numbness and tingling in the neck, nausea and dizziness occur.

It is important to start timely and topical treatment of osteoarthritis of unco-vertebral articulations, as the further spread of pathology can affect the spinal cord and nerve endings, which is fraught with serious neurological disorders.

Deforming osteoarthrosis of the jaw joint 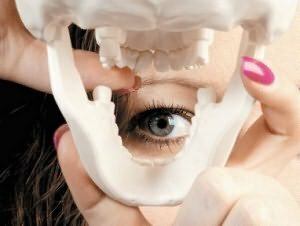 Arthrosis of the jaw joint or arthrosis of the temporomandibular joint is characterized by restriction of movements and the appearance of pain in the performance of vital functions - chewing food and pronunciation of speech.

The reasons for the development of arthrosis of the jaw joint are:

Arthrosis of the jaw joint is characterized by the appearance of pain and crunch when jaw movement, lack of symmetry of the mandible and compaction of the masticatory muscles, presence of morning joint stiffness. 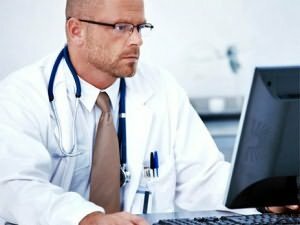 Treatment of osteoarthritis, regardless of the site of localization, includes actions in general directions, which are based on the following principles:

The main thing in the treatment of osteoarthritis is the unloading of the diseased articular node. At the same time, one should avoid long stay on the legs and lifting of weights, try to change the position of the body more often. In addition, weight should be normalized.

To anesthetize and relieve inflammation, use medications - orally or inject them into the joint capsule.

The use of physiotherapeutic methods, which help to reduce pain, inflammation and muscle spasms, improve metabolic processes in articular tissues, is effective in the treatment of deforming arthrosis. The use of therapeutic massage and physiotherapy exercises, taking into account the stage of disease progression, is aimed at the development of weakened periarticular muscular tissues, while the physical effect on the aching joint should be excluded. For advanced forms of arthrosis, surgical intervention is indicated. This may be endoprosthetics and arthrodesis.

This category is B.
But remember, you can be sent to control honey. Examination( if at all you took this picture in the direction of VC did).And there they will want to send you to another picture for another photo( in a military hospital for example).
I do not have the right to send to repeated pictures, so write down the application for refusal because you have already taken pictures in the direction of VC.You will not write - 80%, that according to the new picture there will be only arthrosis of 1 st and will be sent to serve. Osteoarthritis is very subjective.
You will write a statement - there are 2 options, they will be given out by the World Bank or I recognize it as fit.
If the second option - go to court. If you file a lawsuit - run to any accredited medical institution and take pictures on the flat feet, so that in custody there was arthrosis of 2 tbsp. If you produce 2 conclusions about arthrosis 2 st, then the court will have less reason to conduct its forensic honey.expertise and decision will be in your favor.
Remember, in the military enlistment offices there are very brazen people who have a plan for conscription and they must fulfill it.

Yes, you fall under the category B. Read the Schedule of Diseases, article 68.

With your minor illness this category "B-4" is subject to the call!

arthrosis of the talon-navicular joint of the 1st degree

This is when it hurts.

It is treated like any arthrosis - physiotherapy and preparations for cartilage tissue inside. Mud treatment is good. 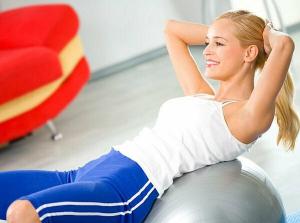 Exercises for the treatment of arthrosis of the hip joint In the diseased joint, the cartilaginous tissue is worn and the spines appear on the bone. Every tenth person on the planet has ar... 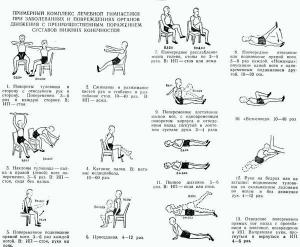 Complex of exercises of physiotherapy exercises for arthrosis of the knee joint With gonarthrosis, there are degenerative changes of articular cartilage with pain manifestations and a decrease ...