Treatment of rheumatism alone at home

Rheumatism is a chronic disease, it can not be cured 100 percent. Treatment of the disease is reduced to slowing the inflammatory processes in the connective tissues, because rheumatism affects not only the joints, but also the cardiovascular, nervous system, the human skin. Official and traditional medicine are looking for ways to treat rheumatism, but so far it is reduced to the removal of pain symptoms and reduce the dynamics of the disease.

Treatment of rheumatic fever includes the taking of various medications. An important place in their list is occupied by antibacterial agents. Rheumatism, as a rule, causes infectious and inflammatory diseases. That is why folk medicine uses antibacterial, anti-inflammatory natural remedies as the most effective method of combating the disease. It must be remembered: treatment of rheumatism at home does not mean abandoning the help of medical specialists. All procedures for treating the disease, internal and external drugs are applied only under the supervision of a doctor. 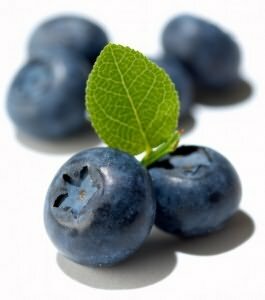 In order to effectively treat rheumatism, it is necessary to follow a diet. Malnutrition is one of the attendant causes of rheumatism, and with the help of a properly formulated diet, it is possible to prevent it and significantly counteract the disease, especially in its early stages. Treatment of rheumatism through diet means a clearly balanced diet. And in cases of exacerbation of the disease - a fruit, lasting several days, a regular diet. A person suffering from an illness must necessarily limit the consumption of salt, fatty and fried foods, spices, strong and alcoholic beverages, foods that contain carbohydrates in large quantities: potatoes, white bread, sugar, etc.

Traditional medicine recommends for the treatment of rheumatism include in the dietin a significant amount of blueberries and watermelons, products containing vitamin C.

They are excellent natural remedies to treat inflammatory and infectious diseases. Cranberry juice with honey effectively helps in the fight against rheumatism, but if a person has diseases of the gastrointestinal tract or liver, the use of this folk remedy can lead to sad consequences.

For treating rheumatism at home, onions are actively used - a universal, universally recognized tool against inflammatory and infectious diseases. To treat rheumatism, the onion pulped to the state of the paste is applied to the sick joints for half an hour three times a day. Onion broth is another well-known folk method in the fight against rheumatism. Three large onions are boiled in one liter of water for 15 minutes, the filtered decoction is consumed daily in a glass in the morning after sleep and in the evening before going to bed. Onion broth is an effective means for preventing not only rheumatism, but also other diseases affecting joints.

Traditional medicine advises to treat rheumatism and with the help of potato juice. It must be drunk daily, but not more than half a glass. The course of treatment of rheumatism with potato juice lasts a month. The most optimal option is when rheumatism is simultaneously treated externally and internally with "potato preparations" - compresses and juice.

Broth from potato peel is another of the preventive agents that can prevent rheumatism. It is noteworthy that this broth is used internally and externally. The secret is that it is brewed only from potato peels, which in itself is a remedy capable of treating various inflammatory diseases.
No less useful in the fight against rheumatism and garlic. Infusion from it helps with various inflammatory diseases. Prepare it very simply: chopped garlic pour vodka, insist about two weeks, filter. And the infusion received is taken 10 drops three times a day for half an hour before meals. The only thing, with liver and stomach diseases, this folk remedy can not be used categorically.

Herbs and collections in the fight against the disease: recipes 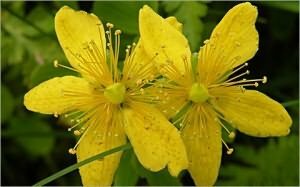 Treatment of most diseases at home is not without the use of medicinal herbs. Here is the list of herbs that are used to treat this disease:

St. John's wort is one of the most popular plants with which to treat rheumatism. Prepare the house of his decoction is easy. The grass is boiled and boiled for half an hour on low heat, then cooled and filtered. An infusion of St. John's wort can be drunk three times a day before meals. But it is necessary to remember: rheumatism can be treated only with herbs collected in ecologically clean areas.

Rheumatism in the home is treated with pine needles, cut in the spring, or more precisely - in May. Pine needles fill a liter bottle and fill them with alcohol. Treatment with this drug can be started in 21 days. Until then, the medicine must be infused.8 drops of the infusion is applied to a piece of sugar and taken inside for half an hour before meals. This procedure is repeated three times a day, treatment of the disease in this way lasts about six months.

How to treat rheumatism - many people have repeatedly addressed this question to Vanga. The great Bulgarian clairvoyant and healer has left in the legacy of mankind many recipes of medicines, with the help of which, as its followers believe, it is possible to overcome rheumatism and its consequences. She recommended treating the ailment with the help of sun baths, soothing the nervous system. She pointed out the need for proper nutrition and mandatory inclusion in the diet of celery. Spirituous tincture from the yellow acacia according to the healer's recipe, where there are flowers, leaves, twigs, is now actively used as a proven remedy against rheumatism.

But there is one weighty factor that makes it difficult to use many drugs against an ailment - the likelihood of an allergic reaction of a person to those or other drugs. Treatment of rheumatism in the home, excluding the control of medical specialists, is extremely dangerous! When choosing this or that folk remedy, you need to know for sure that it will not cause an allergic reaction. Treatment of rheumatism can be carried out with the help of various herbs: wormwood citrine, bearberry, elderberry, chamomile, dandelion, clover, shepherd's bag, burdock, yarrow, etc. But the combination of herbs with each other is better to choose individually.

Rheumatism is a very complex disease, it is accompanied by various changes in the human body, which can be even more severe if the treatment is performed improperly.

The main symptoms of rheumatism in children:

At a laboratory dosage in the biochemical anatomy of the blood, the C-reactive biloc.Також змінються в бік збільшення leukocitarnyі pokazniki і schwidkіst осідання іритроцитів.For the additional X-ray methods of dosage, you can pobachiti destructive zmіni suglobovoe cloth. At the ECG, the impulse of the electricity impulse is manifested. To clarify the diagnosis of rheumatic myocarditis, the abnormality of sertsy is to be recognized by ultrasound dosage.

Prophylaxis to rheumatism in children

The main profilactics of rheumatism in children - tse pereskojanjana penetration into organisms of dithin streptococcus. For that it is important:

In the absence of treatment, rheumatic heart disease occurs. Heart rate abnormalities and heart rate, heart pain and heartbeat failures suggest that inflammation of the heart tissue develops, accompanied by shortness of breath, sweating and weakness.

Other consequences of untreated chronic joint rheumatism include:

The diagnosis can only be made by a rheumatologist.

For this purpose, a complex examination of the body is appointed:

It hurts to move your fingers in the morning? Find out why the joints of the fingers are aching, from our article.

What causes pain in the elbow? Read here.

Than to treat an arthrosis of a humeral joint? All the necessary information in this material.

Rheumatism occurs as a chronic disease with periodic remissions and exacerbations.

During periods of exacerbation, patients are advised to limit the number of movements to reduce the burden on the joints. To do this, they are shown bed rest.

In case of mild illness it is sufficient to observe a semi-fast mode for 10 days.

An easy form of the disease can be treated at home.

In severe, or rheumatism of moderate severity, strict bed rest is required from 2 weeks to 1 month.

According to indications in the dynamics, with the normalization of the general condition and the indicators of laboratory studies, you can gradually increase the activity of movements.

The success of treatment will largely depend on the correct choice of medication.

For the treatment of joint rheumatism, several types of drugs with different effects are used:

All agents used for treatment are effective, but have certain contraindications.

Therefore, to minimize their harmful effects from prolonged use and increase the effectiveness of therapy, a complex treatment is prescribed. It is carried out under the strict supervision of a doctor.

Treatment of joint rheumatism with folk remedies is possible.

And for many years folk medicine has accumulated many recipes to combat this disease. But it is better to carry out treatment in combination with medication.

It is advisable to consult with your doctor about the appropriateness and correctness of this treatment.

Still folk medicine recommends patients with rheumatism joints to take a bath with a decoction of flowers of chamomile, clover, thyme, roots of wild rose or ayr.

In the treatment of rheumatism, nutrition should also be paid attention: the main thing is that the body receives all the necessary substances.

Doctors recommend adhering to diet number 15, increasing the protein component of the diet and reducing the intake of carbohydrates and salt. Do not forget about fruits and vegetables, drink warm drinks: tea with raspberries, decoction of linden.

It is recommended to exclude from power supply:

And with rheumatism nig, you can add the old-time folk song: vrantsi treba scoop the grass, fold її in стіг, і зашити до вечара або оступного дня.By the way, in the field of grass, I stand so much in the way of twenty hvilin. Pislya tsyogo wrap up in a rug and lie down in a lezhko. So repeat the leaf of the bottle of razov, і skinny time stіn guilty bouti again swaps.

Yaksho at once lito, then you can cope with this method of folk rіkmatannya rheumatism. You potibnobo budeks in his shtany tyvsti ball of birch leaves. List povinni buti svizhi, ali yakschoo these are all the same nemeє, cope dry. If you go in such pants, strongly propotyte, after a busy hour, wet the sweat of the leaves on the holy days. Such a compress on nech. Repeat the procedure ten to twenty times.

Likuvannya rheumatism of a raspberry

Ale before the time, yak likuvatisya nettles, be oberezhny, marvel at the facies. If you give the procedure, get ready for the camp of your health, as soon as possible, you can sell it.

For prigotuvannya alcohol you need to collect the jar of mugs. For chyogo, you can smear the throat of the banks with chim-nebud malt and serve the jar in front of the antler. If you put komahi in a jar, you can turn it into a bowl, turn it into a bowl, you can pot it in the pich, after a couple of hvilin viparuvati liki. Tse і му Murashiniy alcohol.

The course of rheumatism is to stop, if you are viscous, you need two banks of such a warehouse in the middle.

In barbaris there is a charcoal baguette, before that, tse garne folk ritual for rheumatism і зміцнення серця. 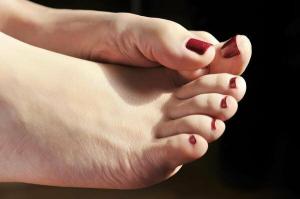 Treatment of valgus deformities of the big toeDiseases Of The Joints 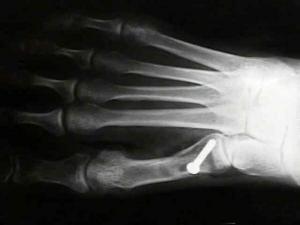 Valgus deformation of the first toeDiseases Of The Joints

Hallux Valgus. Valgus deformation of the first toe of the foot The lesions of the feet begin to occur more and more often. One of the most common types of pathology of the foot joints is valgus...