Causes and symptoms of lateral meniscus of knee joint 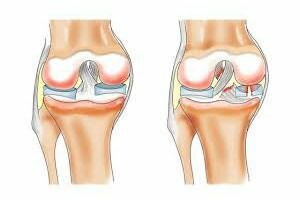 Menisci in kneejoints play the role of shock absorbers, serve to fully interact the shape of the contiguous surfaces of bones and maintain the stability of the knee joint. The lateral meniscus is located outside the knee joint and is more mobile than the medial meniscus( internal), due to which it is less susceptible to traumatic injuries.


Causes of trauma to the lateral meniscus of the knee joint

The most common cause of trauma in the lateral meniscus is an indirect or combined injury in which the shin is turned inside. If the leg is too steeply bent out of the bent state, excessive tibial lead, the meniscus can also be damaged.

Direct injury, for example, when a joint strikes directly on the hard edge of a surface or when it is hit by a heavy moving object, is diagnosed rarely. But, if it happens repeatedly, the most common chronic trauma is the meniscus, which eventually leads to its rupture.

Diseases of a rheumatic nature can cause a degenerative change in the lateral meniscus.


Signs and symptoms of the lateral meniscus

Clinical manifestations of damage to the lateral meniscus are divided into two periods: acute and chronic. Often at the beginning of the disease, it is very difficult to correctly diagnose, since there are symptoms of nonspecific inflammation, which are also characteristic of other internal injuries of the joints. As a rule, the patient is concerned about pain in the area of ​​damage, along the joint space. At movement, especially at an extension, there is a sharp pain that leads to restriction of impellent ability.

In most cases, the injury is one-stage and leads to bruises, tearing, and in severe cases to rupture or even crushing of the meniscus. A complete rupture of the first time the injured meniscus occurs most often in the presence of degenerative changes or an inflammatory process. As a result of conservative therapy, the majority of patients experience complete recovery.

After the end of the subacute period, which lasts 2-3 weeks, the reactive phenomena disappear, and the true clinical picture of the lesion becomes visible. It is characterized by the presence of certain symptoms, such as pain, constantly present and inflammation of the capsule. The presence of effusion is determined and joint blockade often occurs. Anamnesis of the patient with a detailed description of the details of the received trauma and positive pain tests for extension, displacement and compression play an important role in the formulation of the correct diagnosis.


Diagnosis of damage to the lateral meniscus

A detailed description of the moment of injury is very important for diagnosis. Damage to the lateral meniscus is very rarely accompanied by blockade of the joint, due to its mobility, it is more prone to contraction than the rupture. As a rule, there are symptoms of movement and slipping of the meniscus and a specific click with minimal movement.

In the case of traumatic damage to the lateral meniscus, patients complain of pain in the area of ​​the outer joint slit, the intensity of which increases when the shin is moved inwards. Exterior examination can reveal the swelling of the knee joint and the development of infiltration.

These symptoms are quite common and are present in other pathologies of the knee joint, which greatly complicates the diagnosis. Pain tests are most often with lesions of the lateral meniscus, there are negative, except for the clicking knee, joint blockade also does not develop in all cases.

The most objective method is radiography, with the help of which the narrowing of the damaged part of the joint gap with signs of deforming arthrosis is determined.

A certain complexity arises in the diagnosis if the meniscus is of an atypical form or if both menisci are damaged in chronic trauma.


Treatment of damage to the lateral meniscus

The choice of method of treatment depends on the nature of the trauma and the condition of the patient. Contusions, small ruptures, changes of degenerative type, are subject to primary conservative treatment. If the injury is serious, with large gaps and is accompanied by severe pain or blockade, categorically indicated surgical treatment, which is most often performed with the help of endoscopic equipment. Surgical intervention is also required for patients who have not received any improvement as a result of conservative treatment.


Rehabilitation after damage to the lateral meniscus

Terms and measures for the rehabilitation of the treatment of such diseases are chosen individually for each patient. It is recommended at the initial stage to use crutches and the maximum reduction in the load on the aching leg.

How to treat a meniscus - conservatively or operatively?

The knee meniscus is a cartilaginous layer with a collagen microstructure located between the tibia and the femur, acting as a shock absorber and stabilizer. In total, the knee has two such plates, resembling transparent lenses in the form of a crescent:

Frequent damages of the knee joint meniscus - rupture or separation. Their treatment is carried out, mainly, with the help of surgery. 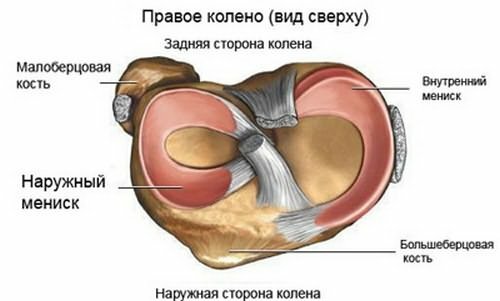 Menisci in knee plays an important cushioning and stabilizing role

How the meniscus is fastened in the joints 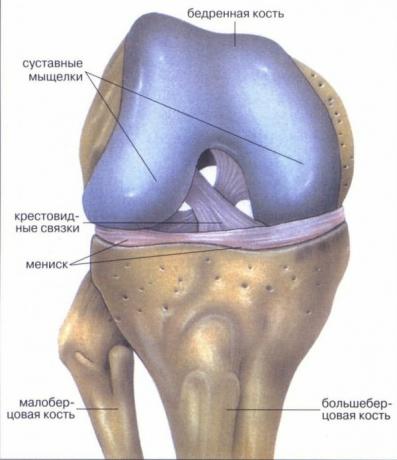 The lateral outer meniscus is loosened more than the medial internal

The lateral meniscus is more free and fastens :

Honda Forte, TSB No. 36.Prices, description and reviews about HONDA FORTE.Buy HONDA FORTE in Moscow. HONDA FORTE , tbl №36 " Honda AS Fort tablets With the complex of chondroitin and gluc...

Ointment of shark fat for joints priceTreatment Of Joints

WHY CREAM WITH SHARROW FAT IS AN EFFECTIVE MEAN FOR JOINTS? Shark Fat - this fat is extracted from the liver of a shark. In fact, this is a unique substance, can relieve a person of many ... 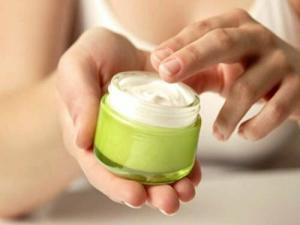 Thai ointment for jointsTreatment Of Joints

Which ointments for joints are better to choose? The modern pharmaceutical market offers a wide range of ointment forms for the treatment of joints. Probably, every person who suffers regular j...