Whether take with a flat-footed army 2016

At a certain age, the question often arises, how compatible are the flat feet of 1, 2 or 3 degrees and the army? Moreover, this is a rather common disease, flat feet of different degrees of complexity is very common. What is characteristic, run and load on the foot with such a disease are contraindicated, and the army ignores these contraindications. As a result, the disease in 2 years can seriously progress. Let's see what legislators of such countries as Russia, Ukraine and Belarus think about it.

How to be guided by a conscript? 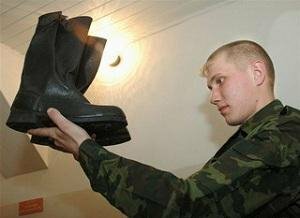 As the largest of the countries in question is Russia, we'll start with it. In this case, the draftee should read the latest edition of Regulation No. 123 dated 25.02.2003, namely, "the schedule of illnesses. People with flat feet are particularly interested in the article number 68 of the section on musculoskeletal diseases. Having carefully studied this document, you will figure out yourself, "threatens" you with going to the army, or not.

A similar document in Ukraine is article 62 of the section "Diseases of the musculoskeletal system and connective tissues, their consequences", which is included in the "Order of Diseases, Conditions and Physical Deficiencies that determine the degree of fitness for military service".This document was approved by the order of the Minister of Defense of Ukraine No. 402 of August 14, 2008.Here you will find information on how to treat this disease when invoking the Ukrainian army.

It is recommended that Belarusians read article No.68 "Instructions on determining the requirements for the state of health of citizens with an addendum to the conscription section, conscription for urgent military service, reserve service, military service of reserve officers. ..".The title of the document is very long, so we give only the first part of it. This instruction was approved by Decree of the Ministry of Defense and the Ministry of Health No. 51/170 of December 20, 2010.

It should be noted that in this case the legislators of all three countries showed a rare unanimity, the issue of flatfoot 1 st, 2 nd, 3 rd degree and service in the army is considered everywhere the same way, and if you read the documents carefully, it seems thatthey were written by the same person, only in different languages. In general, we can say that the flat feet of the army of Belarus, Ukraine and Russia are perceived almost identically. How exactly - we look further.

On which groups in the army are flatfoot divided?

As we have already understood the similarity of documents, we will consider the matter in general. So, in all the lists there is a division of the disease into 4 groups.

Group "a" understands a serious violation of functions with flat feet, in this case the draftee falls into the category "D" and is considered unfit for service in the army.

Group "b" implies a moderate disruption of functions with flat feet, in this case the recruit is waiting for the category "B" - is limited( suitable for peacetime).Such a person receives a military ticket and goes to the reserve, he is released from the draft. A man of this category can be called into the army only in wartime.

Clause "c" describes minor violations of functions with flatfoot, in this case the recruit is waiting for all the same category "B".

The item "g" implies no violation of functions when there is objective data. Here the category "B-3" already goes, it is fit to serve in the army, except for some kind of troops. It should be noted that in the Ukrainian law the category does not sign, people with the item "g" simply get the status "good", but it does not change the essence.

What are the degrees of flatfoot and diagnoses 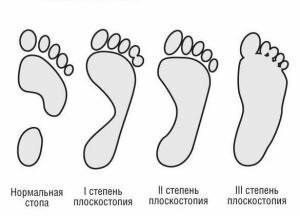 When determining the degree of flatfoot, the physician should be guided by:

The diagnoses for position number 123 are distributed as follows:

a) horse, varus, hollow, heel, equinovarus, flat-valgus deformed foot, which was formed as a result of injuries or diseases, preventing the use of military footwear;B) third degree of flatfoot( transverse or longitudinal);

c) 2nd degree of flatfoot( only with arthrosis of the 2nd degree);

d) 1st or 2nd degree of flatfoot( with deforming arthrosis 1 st degree in the absence of contracture of fingers and exostoses).

In this article, it is stated that flat feet of 1-2 degrees not accompanied by osteoarthritis is not an obstacle for military service.

It follows that longitudinal or transverse flatfoot of the first and second degree will not cause the conscript to be placed in any of the "unpreserved" categories, unless it is burdened by other diseases, but those conscripts who found the third degree of flatfoot are "unfitin peacetime "and released from draft.

Who determines the degree of flatfoot?

This is the task of a doctor in a polyclinic, namely an orthopedic surgeon. Based on the above documents, he must draw a conclusion and make a diagnosis. The military commissioner himself can not diagnose the supply of , he simply does not have the right to do so. His task is only to determine the level of fitness for the service in accordance with the diagnosis of the doctor.

Flatness of 1 degree and 2 degrees - category of validity

Flattening is one of the most common diagnoses among young people conscripted into the army. Often it is precisely this that causes the release of a citizen from passing the conscription to military service, and sometimes from the performance of military duty. Perhaps that's why in the latest edition of the Schedule of the disease, the requirements for the health of conscripts have decreased noticeably. The list of diseases and functional disorders, at which service in the armed forces of the Russian Federation became possible, expanded. The list of these diseases was enlarged and flat feet. Now you can easily be considered fit even with this disease.

What has changed? Only the demands of the state for the health of conscripts. But health itself has not changed, at least for the better. Now on a medical examination, where you determine your category of fitness for military service, it became much more difficult to get the right health mark. Now, even if you have flat feet, then to get rid of the army you need to have a high degree of functional disorders caused by this disease. Details are further in the article.

Flattening 1 degree at the beginning of 2016 will mean for the recruit category "A".This means that a person is completely healthy and ready to serve in any troops of the RF Armed Forces( even in special forces).This means that the angle of the hollow on your sole should be from 131 to 140 degrees with the longitudinal. And with the transverse, the first finger deviates by 15-20 degrees and the angle of the metatarsal between the first two bones is 10-12 degrees.

In this case, this stage of the disease is not even considered something that can place military duties, although a person feels some fatigue after walking, running, other loads and can experience pain.

Flattening of 2nd degree is determined by the following features:

With such a stage of this disease, you will get the "B3" fitness category. And this will happen, only if you have a joint with a flatfoot deformed arthrosis of the 2 stages of the flow. It is characterized by the destruction of the soft tissues of the joints of the foot, which leads to their deformation and can cause a significant pain in a person. Signs of stage 2 of arthrosis:

As you can see, in the conditions of military service this variety of flat feet will bring to the person numerous problems of both physical and psychological nature. Not to mention the fact that without proper corrective measures and treatments, the ailment will certainly noticeably progress.

With what flat-footed will not they enlist in the army?

Avoiding service in the army will help with only two kinds of this disease:

With longitudinal flat-foot 3 degrees or with a transverse flat-foot 3 to 4 degrees. Also, at least one or more factors are allowed: READ ALSO

Do you take to the army with a flatfoot?2016

No. They do not. Because you need individual shoes. Yes, and the load in the army is different for the feet problems.

and this depends on the degree of flatfoot.

With that which does not interfere to serve CALL.That is, they call with a small degree. And who has a large degree of flatfoot, those of course do not call.

still like that!
depends on the degree of flatfoot

Take. If there is a huge desire - well ask)

With the I and II degree call, with the third degree is not. IV degree of flatfoot does not exist, there are only three.

yeah, now generally all take even with the most extreme degrees.conscripts are not enough

Is the army taking a flat-footed 3rd degree?

I am the mother of the former draftee. He also had a flat foot of grade 3, plus the consequences of a serious injury. Frankly, if I had not ridden my son on a commission at the military enlistment office, it would have to be sought through the court. Even they tried to prove that he was fit. Yes, and tried to fuck money. Only the warning that we will meet in court, plus the whole card of my son, numbered, scanned, and it all at the end of the card recorded, had in the hands of photocopies of honey documents, WELL pre-talked with the pre.honey commission, Only after this was found unfit, and the regional commission confirmed. One piece of advice, do not give pictures, they should be with you, before deciding on worthlessness, because any conclusions, pictures, etc., are lost anyway, but when you offer a copy, they are immediately there. And do not be afraid if they threaten the psychiatric hospital, this is their usual course, behave calmly and firmly. It was after such threats, I had to talk on the topic of the court. Good luck to you, and it is better to connect a mother or father, since parents are considered more, though they try to fuck money with their parents, there is a need for firmness.

I AM THAT WHO COMES TO HELP.

to the troops of the Ministry of Emergency Situations.

Are two stops in the army with longitudinal flat feet?

Most likely to be called with category "B"

Flattening in the child 1 yearFlat Footedness

Flattening in children: its prevention and treatment At first glance, it may seem that the child has the same foot as an adult, only in miniature. But if you look closely, you will quickly see ...